“The Counsel of Peace Shall Be Between Them Both”

Why did the Lord make us to be kings and priests unto God? This divine mystery is revealed to us in the book of Ephesians which says, “And hath put all things under his feet, and gave him to be the head over all things to the church, which is his body, the fulness of him that filleth all in all” (Eph. 1:22–23). God the Father has made Jesus to be the head over all things pertaining to the Church. When it says “Church” here, it’s not referring to the local neighborhood church. The word “Church” in being used to describe the entire multitude of Christians wherever they are in the earth. It is the Church universal. Then in verse 23, we see the Church of the Lord Jesus Christ is called “His body.” Jesus is the Head and we, the Church, are collectively the body of Christ. He is the head and we are His body.

Here is the divine mystery revealed… Are you ready? Here it comes! The mystery is the head and the body are one!

Okay, that may be common knowledge, but I’m just trying to make a point. We can see this simple truth illustrated in the natural human body. The head and the body are one unit. The head can’t do anything without its body. The body can’t do anything without its head. Think of it this way: your head can’t be called by God to do one thing, and your body called to something different. For instance, imagine how unworkable it would be if your head was called to missions, but your body was called to be a worker in children’s church. It’s a silly notion. It’s silly because the head and the body are one. If your head is called to one thing, so is your body.

That’s the subject we’ll be looking at in this post: the two-fold calling of Jesus as both king and priest.

Jesus’ two-fold calling is a fascinating subject in end time prophecy. There are a few prophecies of His two-fold calling in the book of Zechariah. The time frame in which the events in the book of Zechariah take place is after the 70-year exile of the Jewish people. When the Medo/Persian King Cyrus conquered Babylon, he made a decree that all the Jewish exiles would be free to return to Jerusalem. The prophet Zechariah was among those that returned to Jerusalem.

And the word of the Lord came to me, saying, Accept donations and offerings from these [as representatives of the] exiles, from Heldai, from Tobijah, and from Jedaiah, who have come from Babylon; and come the same day and go to the house of Josiah the son of Zephaniah. Yes, take from them silver and gold, and make crowns and set [one] upon the head of Joshua the son of Jehozadak, the high priest, and say to him, Thus says the Lord of hosts: [You, Joshua] behold (look at, keep in sight, watch) the Man [the Messiah] whose name is the Branch, for He shall grow up in His place and He shall build the [true] temple of the Lord. Yes, [you are building a temple of the Lord, but] it is He Who shall build the [true] temple of the Lord, and He shall bear the honor and glory [as of the only begotten of the Father] and shall sit and rule upon His throne. And He shall be a Priest upon His throne, and the counsel of peace shall be between the two [offices—Priest and King].” (Zec. 6:9–13 Amp.).

In this passage of scripture, we see three Jewish men, Heldai, Tobijah, and Jedaiah, from Babylon making a pilgrimage to Jerusalem. They came with donations and offerings. The Lord instructed Zechariah to “take from them” their offerings of silver and gold. With their offerings, Zechariah was to make crowns. The Lord then instructed Zechariah to crown the head of Joshua the high priest. Joshua is prophetically standing in place of the future Messiah. When Zechariah placed the crown on Joshua’s head, he then prophesied about the coming Messiah, saying, “Thus speaketh the Lord of hosts, saying, Behold the man whose name is The BRANCH; and he shall grow up out of his place, and he shall build the temple of the Lord: even he shall build the temple of the Lord; and he shall bear the glory, and shall sit and rule upon his throne; and he shall be a priest upon his throne: and the counsel of peace shall be between them both” (KJV).

The prophecy is about “the man whose name is The Branch.” The title of Branch refers to Messiah’s calling as King, as he is from the root of Jesse, who is the father of King David. (See Isa. 11:1.) Zechariah prophesied that the Branch, Messiah, will grow up out of His place and He will build the temple. Then we come to verse 13, the extraordinary verse where Zechariah prophesies that Messiah will stand, or minister, in both offices of priest and king:

Verse 13 says the Branch, as king, will “sit and rule upon His throne.” After that, it says He shall be “a priest upon His throne” as well! Not only will Messiah fill the office of king but He will fill the office of priest too. It’s important to note that this is not saying He will function in these offices at different times. It’s saying He will function in both these offices at the same time.

Furthermore, Zechariah prophesied “the counsel of peace shall be between them both.” By both, he meant both callings. While Messiah stands in both these offices, there will be no conflict or competing interests resulting from the two functions of priest and king. This is an extraordinary prophecy! First, the way Israel’s kingship was set up, it would have been impossible for any king to function in both offices of king and priest/prophet. And, secondly, a study of Israel’s history reveals there was constant conflict between the offices of king and priest. And the reason there was constant conflict between the two offices is due to the way Israel’s kingship was set up.

Israel’s Kingship Was Unique Among the Nations

In the beginning, God and the children of Israel had a covenant. He would be their God and they would be His people. And in this relationship, God was their king. His spokesmen were His prophets. God used the prophets to speak to His people. Sadly, there came a time when the Israelites wanted to be like the nations around them. They wanted a flesh-and-blood king. It was a rejection of God as their king. The prophet Samuel let them know their desire for a flesh-and-blood king was wicked: “…you shall know and see that your wickedness is great which you have done in the sight of the Lord in asking for a king for yourselves” (1st Sam. 12:17 Amp.). Even though it wasn’t God’s perfect will for them, He nonetheless gave them a flesh-and-blood king in Saul.

The kings of Israel were never meant to have autonomous authority. The office of king was to be subordinate to God and His covenant with the people. The king was to submit his will to the will of God. He was never to rule the nation through his own will. The king was to be guided through the prophetic word of the prophet. Through the prophets, the Lord would reveal His will for the nation to the king. The king, in turn, would administer God’s will and plan for the nation. The king’s function was to ensure God’s will was fulfilled. This arrangement allowed the Israelites to have their flesh-and-blood king, and it allowed for the continued rulership of God over His people as their Great King.

After choosing a king for the nation of Israel, the prophet Samuel warned the people saying:

“Now see the king whom you have chosen and for whom you have asked; behold, the Lord has set a king over you. If you will revere and fear the Lord and serve Him and hearken to His voice and not rebel against His commandment, and if both you and your king will follow the Lord your God, it will be good! But if you will not hearken to the Lord’s voice, but rebel against His commandment, then the hand of the Lord will be against you, as it was against your fathers. So stand still and see this great thing the Lord will do before your eyes now” (1st Samuel 12:13–16 Amp.).

There were two instances when Saul failed to obey the word of the Lord that came through Samuel. The first was right before a battle with the Philistines. They had gathered in great numbers to fight Israel. Israel’s troops were so frightened that they hid. Samuel told King Saul to go down to Gilgal before him. He told Saul, “You shall wait seven days until I come to you and show you what you shall do” (1st Sam. 10:8 Amp.). Samuel would offer burnt offerings and sacrifice peace offerings to make supplication to the Lord before battle. Saul went to Gilgal and waited for seven days. Samuel hadn’t arrived and Saul’s fearful troops were scattering. Feeling the pressure, Saul made the sacrifices himself, an act he was forbidden to do. Right when he was done, Samuel showed up. Outraged, Samuel rebuked Saul saying, “You have done foolishly! You have not kept the commandment of the Lord your God which He commanded you; for the Lord would have established your kingdom over Israel forever; but now your kingdom shall not continue…” (vv. 13–14). 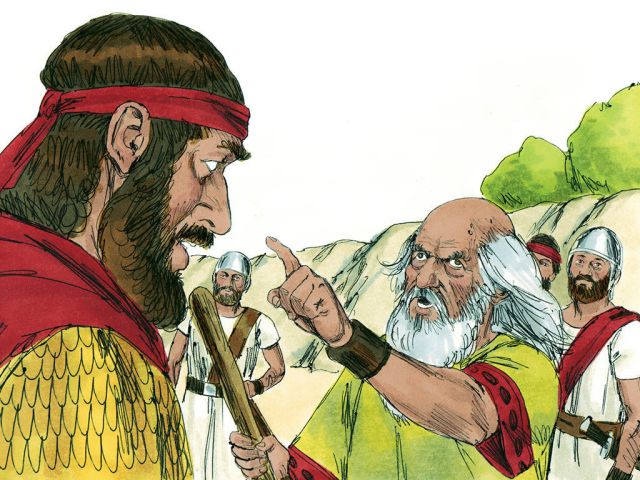 Another instance when Saul failed to obey the precise instructions of the Lord was when Samuel told King Saul he was to smite the city of Amalek. The Lord’s instructions were not to spare anyone or any living thing, not even their king, Agag. Once again, Saul failed to obey the Lord’s instructions. They failed to kill Agag, the king of the Amalekites. And they spared the best sheep, oxen, fatlings, and lambs for themselves. The Lord told Samuel about King Saul’s disobedience and said He regretted having made Saul king. When Samuel confronted Saul about his disobedience, his only defense was to say, “I feared the people and obeyed their voice.” (1st Sam. 15)

Saul failed to obey the instructions of the Lord. He feared the people more than he feared God. As a result, Israel’s very first king got fired from his job! The Lord removed His anointing from Saul and then chose David to be Saul’s successor to the throne.

Can you now understand why Zechariah’s prophecy about Messiah fulfilling both offices of priest and king is extraordinary? It’s in stark contrast with all of Israel’s history! Israel’s kingship was set up in a way that made it impossible for any king to operate as a priest/prophet.

Not only that, there was constant conflict between the king and the prophet because the kings didn’t always want to listen to the prophets. Yet Zechariah prophesied “the counsel of peace shall be between them both.” When Messiah stands in both offices of king and priest, there will be no conflict, only peace!

In the following posts, we’ll look at other places where Messiah’s two-fold calling as priest and king are prophesied!

Ever heard the phrase, “Pay it forward”? Here’s my twist—Email it forward!

Sign up for a free subscription to End Time Mysteries Blog at the bottom of the page.