By Karen Thompson
Third in a Four-Part Series

The Dream of the Metal Man

This is the third post in a four-part series about King Nebuchadnezzar’s dream of the metal man recorded in Daniel chapter two. In previous posts, we reviewed Nebuchadnezzar’s dream from the aspect of how it affected him and how he became full of pride. When Daniel told the king that he represented the head of gold on the metal man, it went to his head. He promptly built a giant replica of the fierce looking man in his dream. He forced everyone to worship the image under the threat of death. We saw how God set aside Nebuchadnezzar’s command to kill all those who refused to worship the golden image when he saved Shadrach, Meshach, and Abednego from the fiery furnace. In the end, we saw how God humbled King Nebuchadnezzar.

God Gives Daniel the Interpretation of the Dream

Daniel chapter two tells us about a dream that the Babylonian King Nebuchadnezzar had about a fierce looking man made up of various metals. The chapter begins by saying Nebuchadnezzar became troubled by dreams he had been having in the second year of his reign (v. 1), so troubled that he couldn’t fall asleep. One night, he summoned all of his wise men (the magicians, exorcists, sorcerers, and astrologers) to come to him after he dreamed the dream again.

The king demanded his wise men to tell him the dream and then give the interpretation of it. He threatened them with death if they could not tell him what he had dreamed. They could not and so the king gave the command that all the wise men in his kingdom were to be put to death—including Daniel and his three companions.

When Daniel heard the reason why he and his friends were going to be put to death, he asked the king for time to fulfill his request. Daniel and his friends then prayed to God for His help. That night, Daniel dreamed the same dream the king had dreamed, and God also gave him the interpretation. Daniel was then brought before the king to give him the interpretation of his dream.

Dan. 2:31 Thou, O king, sawest, and behold a great image. This great image, whose brightness was excellent, stood before thee; and the form thereof was terrible. 32 This image’s head was of fine gold, his breast and his arms of silver, his belly and his thighs of brass, 33 His legs of iron, his feet part of iron and part of clay. 34 Thou sawest till that a stone was cut out without hands, which smote the image upon his feet that were of iron and clay, and brake them to pieces. 35 Then was the iron, the clay, the brass, the silver, and the gold, broken to pieces together, and became like the chaff of the summer threshing floors; and the wind carried them away, that no place was found for them: and the stone that smote the image became a great mountain, and filled the whole earth.

Daniel fulfilled the king’s request by describing in detail the king’s dream of a giant metal man. Daniel said, “This is the dream; and we will tell the interpretation thereof before the king” (Dan. 2:36). He described a great image that shined with brilliance and looked “terrible” or as others would say, “fierce.” This image was made up of different metals. The head of the image was made up of gold. His chest and arms were made of silver. The belly and thighs were made of brass. Next, the two legs were made of iron. Finally, the feet were made partly of iron and partly of clay.

Then as Daniel watched the image, he saw the great image destroyed. He saw a stone hit the image on its feet. When it smashed the feet, the entire image broke into pieces. It became like the chaff and the wind blew it away. It was the end of the great image. After the stone brought down the image, it grew into a mountain so large that it filled the whole earth.

After describing the dream, Daniel began to interpret the imagery of the dream. He started with the head of gold. He said, “Thou, O king, art a king of kings: for the God of heaven hath given thee a kingdom, power, and strength, and glory. And wheresoever the children of men dwell, the beasts of the field and the fowls of the heaven hath he given into thine hand, and hath made thee ruler over them all. Thou art this head of gold” (Dan. 2:37–38). Daniel told Nebuchadnezzar that as king of Babylon, he himself represented the head of gold.

When Nebuchadnezzar conquered all of Israel/Jerusalem, the clock started ticking on the period of time referred to as the “times of the Gentiles.” From that point on, we see Israel being ruled and dominated by Gentile powers after she lost her autonomy as a nation. Jeremiah prophesied that the Jewish exiles would be allowed to return to Jerusalem after 70 years. (Jer. 29:1–10)

Daniel continued with his interpretation saying, “After thee shall arise another kingdom inferior to thee” (Dan. 2:39a). This next empire represented on the metal man as the chest and arms of silver is the Medo/Persian Empire. We know this from history but also from Daniel’s visions in later chapters that the Medes and Persians together would conquer Babylon after Nebuchadnezzar was gone.

When the Medes and Persians conquered Babylon, Cyrus, king of Persia, made a proclamation that all the Jewish exiles could return to Jerusalem. Why did the Persian king do this? He said the Lord God of heaven charged him with the task of building the temple. We can read about it in the book of Ezra:

“Now in the first year of Cyrus king of Persia, that the word of the Lord by the mouth of Jeremiah might be fulfilled, the Lord stirred up the spirit of Cyrus king of Persia, that he made a proclamation throughout all his kingdom, and put it also in writing, saying, Thus saith Cyrus king of Persia, The Lord God of heaven hath given me all the kingdoms of the earth; and he hath charged me to build him an house at Jerusalem, which is in Judah. Who is there among you of all his people? his God be with him, and let him go up to Jerusalem, which is in Judah, and build the house of the Lord God of Israel, (he is the God,) which is in Jerusalem. And whosoever remaineth in any place where he sojourneth, let the men of his place help him with silver, and with gold, and with goods, and with beasts, beside the freewill offering for the house of God that is in Jerusalem” (Ezra 1:1–4).

After Cyrus’ proclamation, thousands of the Jews went back to Jerusalem; however, they were still under the dominion of the Medo/Persian Empire.

Daniel went on to interpret the kingdom of brass: “And another third kingdom of brass, which shall bear rule over all the earth…” (Dan. 2:39b). The third empire represented on the metal man as the trunk and thighs of bronze is Greece. Again, we know from history as well as from Daniel’s later visions that the ruler who would conquer and rule the Persian Empire was Alexander the Great representing the Grecian Empire. At 23 years of age, he became king of Macedonia and immediately set out to conquer the world. In just 12 years of military campaign, he conquered a great deal of the known world at that time. When Alexander the Great conquered the Medo/Persian Empire, Jerusalem came under the dominion of the Grecian Empire.

The fourth empire represented on the metal man as the “legs of iron” is the Roman Empire. Daniel’s description of the Roman Empire included a lot of action. “And the fourth kingdom shall be strong as iron: forasmuch as iron breaketh in pieces and subdueth all things: and as iron that breaketh all these, shall it break in pieces and bruise” (Dan. 2:40). Daniel’s description of Rome as iron that breaks in pieces and bruise is befitting. Never before Rome’s existence and never after it has there ever been an empire quite like Rome. No other nation has ever come close to the expansion of its boundaries like Rome. Rome still holds the record for the greatest ancient empire that has ever existed.

Rome broke in pieces and bruised Judah/Jerusalem. Ultimately, Rome destroyed the city of Jerusalem and burned down the temple. They ran the Jewish people out of the city. They changed the name of Judah to Palaestina, or the modern-day name of Palestine. It’s because of the Romans that the nation of Israel was obliterated and became non-existent for two thousand years.

Now we come to the very last empire on the metal man—the end time kingdom of Antichrist. Daniel described it:

“And whereas thou sawest the feet and toes, part of potters’ clay, and part of iron, the kingdom shall be divided; but there shall be in it of the strength of the iron, forasmuch as thou sawest the iron mixed with miry clay. And as the toes of the feet were part of iron, and part of clay, so the kingdom shall be partly strong, and partly broken. And whereas thou sawest iron mixed with miry clay, they shall mingle themselves with the seed of men: but they shall not cleave one to another, even as iron is not mixed with clay” (Dan. 2:41–43).

The end time kingdom of Antichrist is represented on the metal man as the feet, made up partly of iron and partly of clay. The two metals symbolized that the kingdom will be divided. It will be partly strong and partly broken.

The image of the metal man represents the times of the Gentiles, a period of time when Israel and the Jewish people will be under the rule and dominion of Gentile powers.  The illustration below is of the metal man in Nebuchadnezzar’s dream. On the left side, you see the succession of the Gentile powers that dominated Israel. On the right side of the illustration, you will see how Daniel’s prophecy of the 70 weeks is played out.

The head of gold represents the Babylonian Empire. As the prophet Jeremiah prophesied, the Jewish people would be exiles in Babylon for 70 years. After 70 years, God would bring them back to Jerusalem. That was fulfilled when the Medo/Persian Empire conquered the Babylonian Empire. The Persian King Cyrus made a decree that the Jewish people could go home. At that point, Jeremiah’s prophecy of 70 years was fulfilled. After that, Daniel’s 70 weeks (weeks of years) prophecy kicked in.

I had a wonderful young artist named Brent Vass create for me this chart of Nebuchadnezzar’s dream of the Metal Man.  I hope you find it helpful. 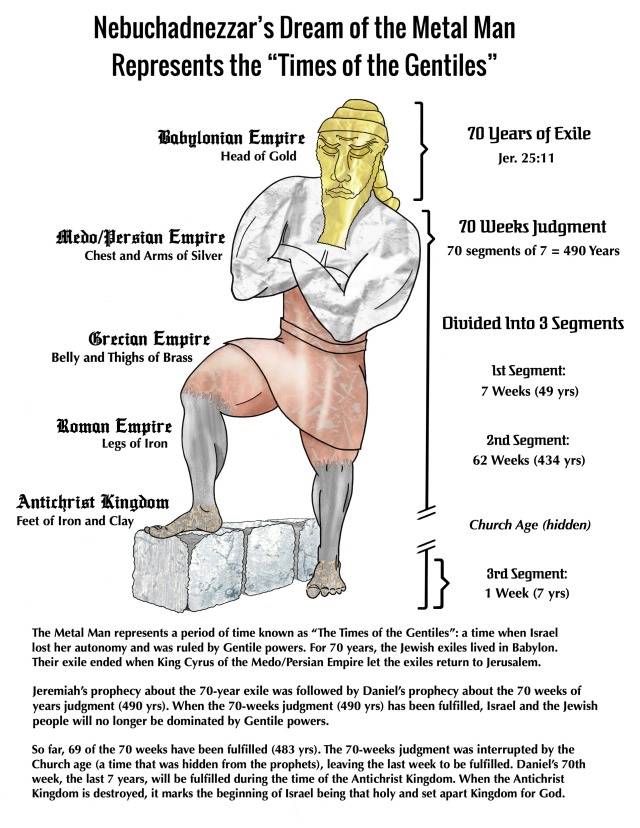 Knock, knock. “Who’s there?” Forward. “Forward who?” Forward this email!

One thought on “Nebuchadnezzar’s Metal Man”